Skip to main content
-A A +A
By:
The Editorial Board
Publication:
Newsday
Oct
22
2014

Thomas Schiliro has never stopped looking for a new challenge, and a new way to serve the community. The 62-year-old, who lives in Manorville, has been a social studies teacher and a college professor. For the past two decades, he's been a Suffolk County parks police officer, and he's been politically active for most of his life.

Now, the Democrat wants to go to Albany to fight for Long Island. It doesn't seem like there will be much of a learning curve.

He wants to create a suburban caucus to unite leaders of those regions, something that's sorely needed. Schiliro also supports lifting state mandates to create property tax relief -- as does, really, every candidate running for state office this year. The difference is that Schiliro, with his experience in education and law enforcement, can point to specific requirements where the state is overstepping its bounds and making school districts and municipalities do things that aren't necessary or efficient, like the massive expansion of services for English language learners.

Running against Schiliro is Anthony Palumbo, the incumbent Republican chosen a year ago to represent the district in a special election.

Palumbo, 44, of New Suffolk, is a talented attorney who clearly cares about the community. He has a good sense of how things work in the state capital, and says the right things about working with the Democratic majority and Republican senators to get things done. And his efforts to get a first-time homeowner exemption from the 2 percent Peconic Bay Community Preservation Fund Tax provided needed relief.

But many of the things he wants to do aren't good ideas. Palumbo favors a three-year moratorium on Common Core, even though that would mean more upheaval. And he favors the creation of a blue-ribbon panel to study Common Core, something that sounds like empty rhetoric. He argues that power rates on Long Island are too high, a topic that certainly resonates, but he supports an elected board of trustees for the Long Island Power Authority, a stale idea that wouldn't help at all.

This race presented two good options, but Schiliro, with his life experiences and down-to-earth feistiness, could really make a difference in the Assembly's Democratic caucus. 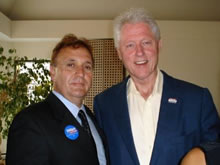